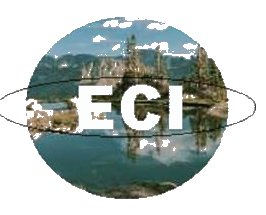 In 2002, ECI submitted a project proposal to UNDP/GEF/SGP to build capacity of NRSP and its community organization in the field of Community Integrated Pest Management (IPM) initially with focus on woolly apple aphid, an important pest of apple in Hunza, Gilgat, Swat and Murree Hills. As it was a first project of ECI with UNDP/GEF/SGP, it was proposed by the sponsors to launch such a project on small scale in coordination with NRSP initially near GEF/SGP headquarters so that it could be easily monitored. Therefore, the mountainous area of Tehsil Murree was selected which is rich in agro-biodiversity. The project was run from February 2002 to August 2003 at a cost of Rs. 1,787,000 in close coordination with National Rural Support Programme.

The projects’ main objectives comprised of Training of NRSP nominated staff in the field of IPM with focus on IPM of apple Woolly aphid, exact identification of the target pest problem, raise awareness among the farming communities for minimizing use of hazardous insecticides and apply alternate environmental friendly methods, motivation and skill enhancement of communities through environment friendly interventions, design and prepare IPM Training Modules.

To achieve the objectives, 17 training courses were conducted for the communities and staff of NRSP Murree. To train them, 11 brochures were prepared and distributed. The project staff trained the Master Trainers in pest management of woolly aphid along with some information on pruning, fertilization and adverse use of pesticides. The project had created awareness among the communities of the area about better crop management and lesser use of pesticides.

The Master Trainers along with nominated staff of NRSP were trained and their capacity was built in the field of biological control based Community IPM of Woolly apple aphid. With the passage of time and working with the local communities, it was felt that communities needed to manage all the major insect pest problems instead of a single pest problem. Therefore, most of the major insect pest problems of apple were encompassed with focus on apple woolly aphid.

These were basically NRSP community organizations that were already working with them. About 18 Master Trainers were selected from amongst the Community Organizations of NRSP in Tehsil Murree in accordance with a mutually agreed selection criteria, in addition to nomination of 2 NRSP field staffs that worked closely with the project to gain skills for management of target apple pests.

At all levels, the project, community members and NRSP prepared a joint agenda, thoroughly discussed the implications and agreed on a common strategy. The selected Master Trainers in turn disseminated the information to their respective communities during the monthly meetings. ECI and NRSP continuously monitored the activities and provide necessary guidelines.

This approach helps tremendously to get feedback from the communities both in verbal and written form.

The projects’ social mobilization approach was based on participatory planning, agreement on set actions / agendas and implementation of the program as a team. The excellent nature of teamwork led all the project partners and stakeholders to achieve the desired objectives of the project.

The project was completed in August 2003. Most of the project objectives were achieved at completion of the project and the relevant farming communities were empowered how to organize themselves for cost effective and environment friendly solutions of their plant protection problems. With the passage of time, the information gained and knowledge generated through the project, communities started dissemination of information to their neighboring farmers by replicating the training modules. In the meantime, ECI and NRSP facilitated the target farmers to establish the fruit orchards based on the concept of IPM by replacing the irregular ill-planned old orchards. As a result, they were able to establish about 15 house orchards of apples each with 50 good variety insect resistant plants.

In 2003-04, woolly apple aphid appeared as a very serious pest problem in Gilgit, Hunza and Sakardu valleys of the Northern Areas of Pakistan. Aga Khan Rural Support (AKRSP) and Department of Agriculture, Northern Areas contacted Eco-Conservation Initiatives (ECI) to address the problem by consultancy services. ECI conducted a thorough survey of the Northern Areas in February 2004 to determine the initial situation. The infestation of woolly apple aphid was so catastrophic that almost 70 % of the apple orchards had suffered from growth retardation. Based upon the information generated and experiences gained in Murree Hills through GEF/SGP funded project, ECI prepared an organized strategy and raised mass awareness campaigns in the Northern Areas in collaboration with AKRS and DOA to solve this problem. To address the issue in an effective way, following steps were proposed to take with immediate effect, which are being applied:

• Mechanical control by diagnostic pruning of the affected branches, rootsuckers and water sprouts from mid February to onward.
• Cultural control by disturbing colonies of the aphids around tree trunks, hoeing and improvement of sanitary conditions in first week of March
• Use of organic / farmyard manures in the orchards around tree trunks to encourage natural predators
• Insect resistant varieties may be identified and promoted as a regular feature
• Classical biological control by redistribution of natural predators and parasitoids from Murree, Swat and Rawalakot areas from end March to October
• Avoiding use of any type of insecticides during the period of releases of natural enemies.

By adopting first 2 – 3 measures, considerable size of insect population was successfully reduced and incidence of the pest decreased.

GEF/SGP has been very instrumental for helping ECI and the target communities in large-scale implementation of biological control based technologies in Pakistan for reduction in use of highly hazardous chemical insecticides and eliminating persistent organic pollutants. This is worth mentioning that the number of secondary adopters of these technologies has started to increase with the passage of time.

Products generated by the project:

In addition to establishment of 15 apple orchards by NRSP Community Organizations, following publications / brochures were produced. Finally these were integrated in the form of a Training Manual as guidance of the Master Trainers and NRSP relevant staff.

IPM training manual produced by the project is quite informative. A total of 12 modules were produced. Out of these 7 are directly related to IPM of woolly aphid of apple, others are indirectly related. These are essentially important for crop management rather insect management. The manual was prepared in sequence with the way training courses were conducted.

Development of linkages with other Organizations

Besides making achievements against the set objectives, this project leveled the ground for very effective networking among various GEF partner organizations. Within the first two months, this project proved to be a focal point for development of linkages among various GEF sponsored projects because of the catalytic role of UNDP/GEF. Because of the first project with financial assistance from UNDP/GEF, ECI has not only adopted a new style of working such as community based IPM activities but also has become a part of a network of development organizations who are conscious about community based development initiatives. This interaction is further strengthening because of several joint activities as part of enhanced working collaboration. As a result of this project, ECI has been able to develop professional linkages with National Rural Support Program (NRSP), Hirrak Development Center (HDC), Soan Valley Development Project (SVDP), Alfalah Development Organization (ADO), Green Circle Organization (GCO) and several other NGOs and CBOs in the country. In addition to this, the current project played a catalytic role for development of a range of small-scale IPM projects by ECI in various regions of the country.

The three partners namely UNDP-GEF-SGP, ECI and NRSP worked together and made their contributions in a smooth way. NRSP provided the logistic support in the shape of office accommodation and linkages with the communities. ECI apart from Technical knowledge also provided logistic support. The working of the project and achievements indicate that these partners have contributed satisfactorily.

Indiscriminate use of chemical insecticides is being discouraged worldwide. There is a need to get rid of them quickly due to their hazardous effects on human population, wild life and environment as a whole. Alternative control measures are being investigated. The lesser use of pesticides ensures promotion of biodivesity. Therefore, its impact is immense. The ultimate aim is to have better environment of the area. However, environment is related to many factors and these cannot be changed in a single year.

Pest problems of apple are very complex. These cannot be tackled in isolation. Therefore control of a single insect pest may not provide methods for sustainable livelihood. It should be multi prong attack usually covering all crop management practices.

The Government of Pakistan policy is to reduce application of pesticides in agriculture. Thus the finding of this project can supplement the government efforts in carrying out IPM strategies for apple pests. Many agencies are now involved in creating awareness among stakeholders on the adverse effects of pesticides. This project has contributed in creating awareness in the target area. The awareness may also be used in other crops grown in the area.